Claiming You Objectively Won A Debate

When people end debates, they usually don’t even try to make an objective claim that they won (or, impersonally, that particular arguments were adequate to reach particular conclusions). Here’s a standard form for an initial impasse statement which is worth knowing:

Here is my understanding of the situation: My arguments, X, Y and Z, were adequate to objectively establish my conclusion, C. Those arguments were conclusive. I said enough that you should be persuaded. A rational, unbiased observer would agree that those arguments won the debate and would tentatively accept the conclusion C. You gave no substantive replies to X, Y or Z (except for one reply to X, which was refuted by my reply X2, which you did not substantively respond to). You made no substantive arguments about C that I didn’t address. There are currently no open questions left. So you should concede, change your mind, and start learning about C. Or else, say something new to change the situation. But you won’t do any of those, which is an impasse.

Most people end discussions with less than this. Not an abbreviated version of it (which could be fine) but less content. They don’t even claim to have won the debate. If you can’t even make a statement like this, you have no business giving up on the discussion.

To have won a debate, you have to be able to claim to have won the debate. That’s necessary but insufficient. It’s required but it’s not enough. Your claim could be wrong. But if you don’t even have a claim like that, you didn’t win. That means making a claim like “In [quote] and [quote2] I gave compelling arguments. I tried several times to get you to engage with them. You didn’t. They were adequate that they should have persuaded a reasonable person.” Making a claim like that is the bare minimum needed to think you won the debate. Actually checking whether that claim is true is a more advanced step but most people don’t even make the claim. They don’t realize that’s the sort of thing that would indicate you won a debate. They don’t know that’s the goal.

Your goal in a debate is to objectively establish some claims. Make adequate arguments for why those claims are correct. Adequate means they should be persuasive to an intelligent, objective, neutral observer. People can easily be wrong about what’s objective or adequate but they should at least try to do this. But most people, in most debates, won’t even claim to have done it and seem to be unaware they were supposed to. People quit discussions without ever saying something like “I thought my argument X was adequate and your responses were missing the point. You’re not listening, dumb or biased or something so I’m going to move on.” That’s not great but it’s better than what people commonly do.

People usually stop discussing without even any claim to have provided information adequate to change the other person’s mind or help them learn better ideas. That’s irrational.

People usually end discussions without even claiming the other person did something specific wrong, was unreasonable about a particular issue, was irrational in a way they’ve stated (rather than just irrational in general), incorrectly judged any particular argument (with reasons the judgment is incorrect), or anything like that. Pointing out a specific, impersonal flaw with the discussion (rather than the person’s ideas) would also work. If you won’t point out any problem with the discussion or with the person, you’re in no position to end the discussion in your favor. And if you have no rational claim that you won, you should consider that you lost and you’re leaving to avoid facing superior ideas.

People often make general, non-specific comments about how bad the other person is or how dumb their arguments are. These do not attempt to rationally and objectively establish any particular claims about what happened in the discussion. They don’t provide a case for why they’re right which they could honestly think was conclusive.

When debating, you should try to make an objective case for some conclusions. You should get to a point where you can claim (in your own opinion) that your arguments were objective, rational and conclusive and the debate should now be over. If you don’t do that, don’t claim you conclusively won the debate. There’s a lot more needed, but this is a basic starting point that people often don’t even reach. 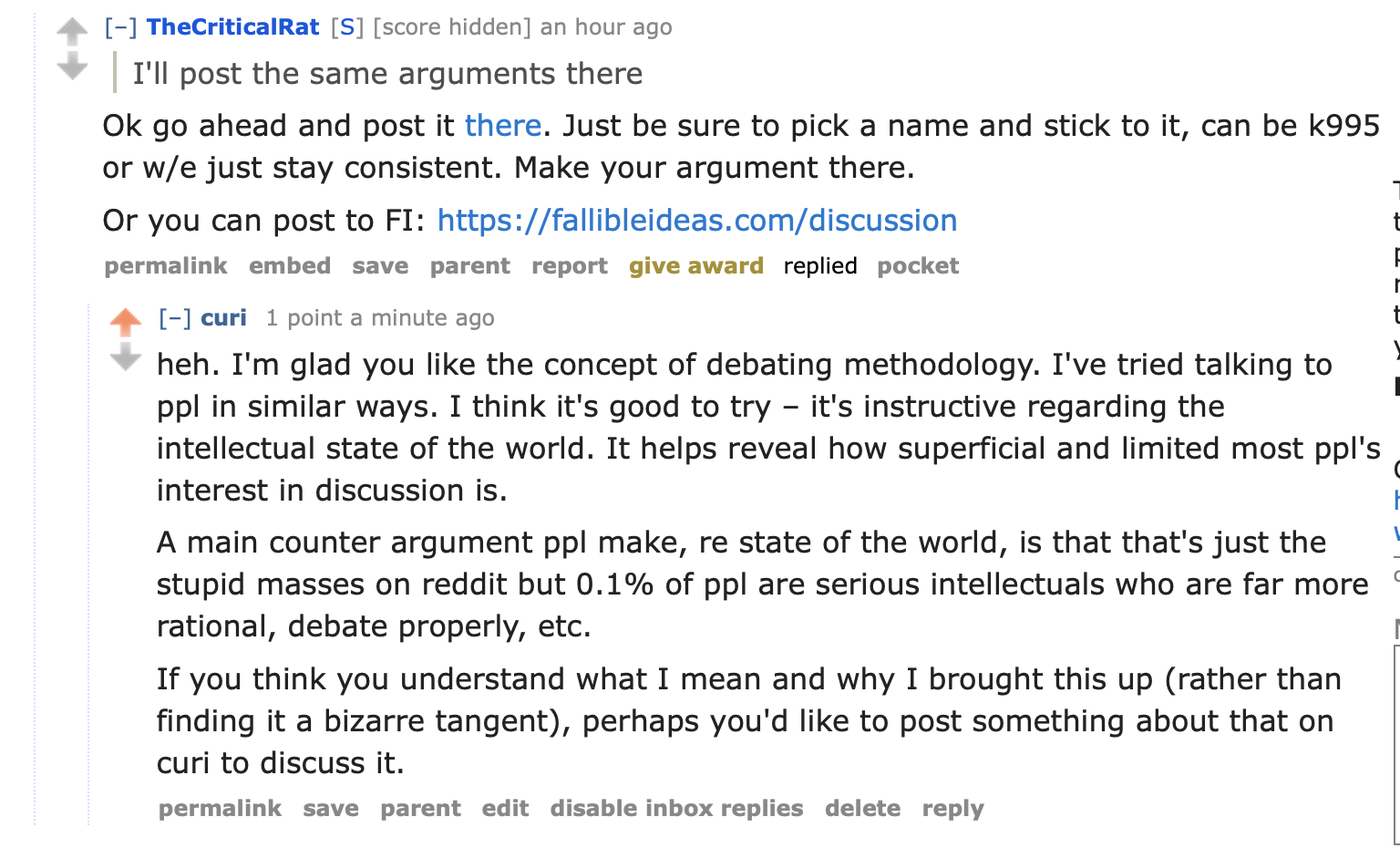 I do not expect that person to actually come to make his argument here. I've had like 9 people claim that they will and do not think they actually have.

I wrote on discord:

> I thought maybe what I could do is reach out and encourage people to either debate or discuss things in FI. I reached out to a ton of people. Way more than the times I tagged. The results were disappointing. I talked to people who claimed that capitalism is the biggest threat to modern society, when I asked them if they would debate this with you. Their response was why would I waste my time debating this. I must have talked to 40 people or so and the result has been basically the same. AFAIK nobody has reached out to FI as a result. It made me realize that, ok I am irrational but I don't think I am anywhere near as irrational as I thought I was comparatively. The state of irrationality (among people who claim to like rationality and value it) is a lot worse than I thought.

I think perspective (understanding the state of the world) might be a reason why you brought it up.

Do you have other reasons?

> A main counter argument ppl make, re state of the world, is that that's just the stupid masses on reddit but 0.1% of ppl are serious intellectuals who are far more rational, debate properly, etc.

Do you find that plausible or convincing, or not? Got arguments one way or another?

I suppose it is plausible that my sample is biased. I asked people in various subreddit though mainly from /r/intellectualdarkweb and some YouTube channels.

My counter to that would be that if they themselves can't make rational arguments, they could link to work from someone they consider in to be in that .1%

Or summarize an argument from a .1 percenter. Has not happened yet.

#14196 That (using links to good work) would involve the people you're talking to responding in a rational way.

The claim I'm interested in is: only a few people are rational and there's little public access to discuss with them (because they're busy and they mostly talk with other super smart rational people).

I think that claim is true -that they have little public access. AFAIK very few public intellectuals are willing to have debates in the manner you make yourself available.

And the non-public intellectuals, academic types, only discuss among themselves citing each others papers. I remember reading recently they showed that most of them go unread, even by the author that is citing them.

Granted I have not looked for that long.

#14198 Are they actually better? Do they (or some particular groups or types of them) have lots of great, rational discussions amongst themselves?

Maybe they have great rational discussions among themselves and never make it public.

Or there are people who do have great rational discussions but I have not come across them.

#14200 It comes up because people say e.g.: Earn your way in and then things will be great. Get a PhD, get hired by Harvard, write a book that sells a ton of copies, do whatever it takes to get access, and then you'll get rational conversations, you'll learn from these ppl, you'll be able to change their mind when you're right, etc.

I think this is false. One of the issues with it is: DD has that access and it didn't enable him to change people's minds or to get very substantial discussions.

It does depend what you think is substantive. E.g. he got some discussions of this sort of nature and quality: https://www.youtube.com/watch?v=jey_CzIOfYE But supposing hypothetically that he's right about CR, I think that kind of thing is inadequate to persuade people of CR and change the intellectual landscape.